When designing a Teflon® or Fluorogold® Slide Bearing, one of the factors that sometimes gets overlooked is the maximum operating temperature the bearing assembly will function at. Standard Structural Steel expansion type joints don’t develop the heat required for temperature to be a concern, but many specialized applications do. Steam Lines, Furnaces, Ovens, etc. all present environments that can compromise a standard FC-1010-CS slide bearing.

The melting point of Virgin Teflon® also known by trade name PTFE is 620°F. Fluorogold® is fiberglass infused Teflon® so it has a similar melting point. On most applications, this is well above the maximum working temperature. What needs to be considered, though, is the bonding agent holding the Fluorogold® or Teflon ® to the steel backing plate. This adhesive can begin to break down at 400°F.

There are several graduations that can be made in the design of a Slide Bearing to resist the effect of higher temperatures.

Shown below in figure 1 is a standard structural steel slide bearing assembly.

Securing the Fluorogold® to the steel backing plate is an epoxy resin adhesive that has been applied, and then baked under pressure to assure a permanent, positive bond. Providing the temperature does not exceed 400°F, it will not allow any separation or re-positioning on the backing plate and will last the life of the assembly regardless of application.

For higher temperature applications, Fluoroloc-HL should be employed (figure 2). The change/upgrade from FC-1010-CS is entirely in the bonding system. The sliding surface is the same Fluorogold® material, possibly a different thickness but otherwise identical composition. The backing plate can be carbon or stainless steel. What changes is the layer of adhesive is omitted and replaced with a very thin screen/mesh. (See figure 2, call out bonding screen)

This bonding screen is a thin layer of perforated stainless steel. The perforations are done leaving fine shreds standing up at a 90° angle, similar to Velcro. The layer of Fluorogold® is then positioned over the bonding screen and the two layers are compressed. The shreds press into and embed themselves in the softer Fluorogold®. This becomes a permanent bond that will not allow for slippage. The call out on the example shown is FHL-0610-SS. 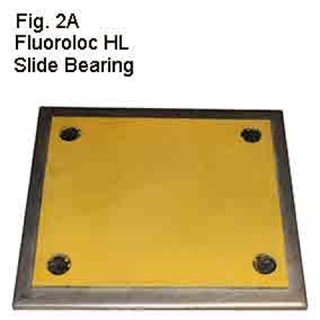 The next step is to affix the bonded screen/Fluorogold® plate to the backing plate (see figure 2A). Holes are routed from the Fluorogold® wherever a weld is desired in order to expose the stainless-steel screen. Welds are then shot through the screen and fuse with the backing plate. This prevents any horizontal movement.

The Fluoroloc-HL Slide Bearing uses no other adhesive. The bond between the three layers is entirely mechanical. With the elimination of the adhesive, the melting point rises to that of the next lowest component, the Fluoroloc® or Teflon®, which is 620°F. The next step to raise the functional temperature of a Slide Bearing Assembly is to replace the Fluoroloc® or Teflon® with Graphite. As shown below in figure 3, the fine grain carbon graphite slide bearing assembly has the same 2,000 psi compressive strength as Teflon® or Fluorogold®, so there is no compromise in that regard. Graphite Slide Bearings also maintain a very low coefficient of friction. The benefit is graphite has a melting point higher than the steel backing plate.

To maintain the elevated temperature resistance, no adhesives are used in a Graphite Slide Bearing. As shown in Fig. 3 it is a mechanical bond, using either screws or rivets. To ensure there is enough material for this bond to be permanent and last the full lifespan of the bearing, the thickness of the Graphite is increased to 1/2” and the backing plate is 1/4”. If machine screws are employed, the 1/4” backing plate is tapped to the required thread size. Hence the call-out changes to Slide Bearing Assembly GP-5025-CS.