Headed vs. Hooked Anchor Bolts: Is there a difference? Which should you use?

In recent years, there has been a shift in preference by the AISC and ACI between headed and hooked anchor bolts. It's important that fabricators and engineers are aware of this trend, and why it has occurred.

Headed anchor bolts are straight with a load bearing member attached by thread to the embedded end, which usually takes the form of either a hex nut or a plate washer positioned in between two hex nuts.

Hooked anchor bolts are curved on the embedded end of the bolt, and the protrusion that this curvature creates acts as the load bearing member for the entire bolt. 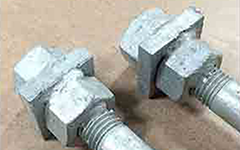 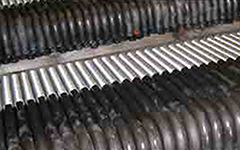 In the past, the steel fabrication industry had a preference to use hooked anchor bolts in steel erection projects. In recent years, however, the trend has changed, with most plans calling for headed anchor bolts for the same projects.

The major reason for this shift is that both the AISC and ACI have provided guidance to all engineers that headed anchor bolts should be used in place of hooked anchor bolts whenever possible. Why is this the case?

This breakout cone cannot form, however, if the bond between the anchor bolt and the concrete is not formed, or is broken, which brings us to the difference between headed and hooked bolts.

Nominal Pullout Strength = 0.9 * Concrete Strength * Distance From the Inner Edge of the Bolt to the Outer Tip * Bolt Diameter

In conclusion, while many architects, engineers and steel fabricators still choose to use hooked anchor bolts, The Steel Supply Company would generally recommend the usage of a headed anchor bolt in most situations. However, The Steel Supply Company is a manufacturer and does not employ engineers. So if an engineer requires the usage of one over the other, we defer to them. In all cases, the plans and drawings should be adhered to.

Please get in touch with any questions regarding your steel fabrication needs.