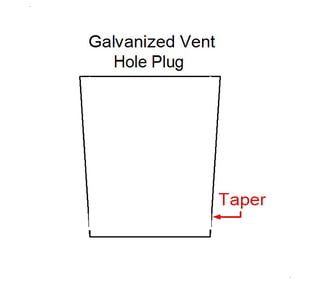 Galvanized Vent Hole Plugs, whether Aluminum or Zinc, will seal themselves very tightly with normal installation. The slight taper in the body allows the plug to be driven into the hole like a wedge. Each successive hammer strike drives the plug in slightly further and makes it a little tighter. As well, both Aluminum and Zinc Vent Hole plugs are relatively soft, malleable metals. While being driven in, they conform to the minor irregularities of the hole. In this way with normal installation, the plug is sufficiently tight to remain in place for the life of the fabricated steel.

If it is desired that the Drain Hole Plug, also known as a Weep Hole Plug, be made even more secure, it is possible to melt the tips of the plug after it has been fully sealed. This should only be done with Zinc Vent Hole Plugs.

To accomplish this extra sealing, the Zinc Vent Hole Plug should be driven into place as usual. Start by setting the plug in the hole. It should fall 1/2 way in. Then, tap firmly with a hammer until the plug is evenly sealed. Increase the force of the hammer strikes until the plug is in as far as it will go. Typically, about 1/4 of the plug remains above the steel surface. After only a few installations, the steel fabricator will develop an understanding of how far to expect the plug to go, and when it is firmly installed.

The next step in sealing the Zinc Vent Hole Plug is to heat the protruding portion until the zinc actually melts and flows over the edge of the hole perimeter. The best tool for this operation is an oxyacetylene torch with a small tip. Keep the pointed edge of the flame (the hottest part) at the edge of the plug. The heat will cause the plug and the Hot Dip Galvanized coating to fuse. The result is similar to soldering.

The plug can then be sanded, grounded down, or left as is. If the steel fabricator chooses to sand the plug down, care should be taken to leave the perimeter of the plug with sufficient depth so the fusing with the HDG coating is left intact.

To see more about our Galvanized Vent Hole Plugs, click the buttons below.