The Steel Supply Company began in 1898 as a manufacturer of paint and specialized in steel coatings. Over the years, the company has learned some things about coatings, steel, rust inhibition, and protecting steel from the elements. So, when a situation arose in the field regarding coatings, there were no better people to consult with. Sandy Liedeker, grandson of the founder Abraham Liedeker, began his career in 1952, eventually becoming a paint chemist. Whenever we reached out to him for help or information regarding a coating issue his most common response was, and still is, “surface preparation.”

One situation that continues to occur involves water based shop coats. There is a fundamental axiom that is often overlooked by the steel fabricator. Oil and water don’t mix. Most fabricators today were trained using alkyd (oil) based primers. Surface preparation could be done at a minimum because the primer would penetrate any residual oil on the steel; oil based primer has better adhesion qualities when applied to steel.

Using latex (water) based primers for the first time, fabricators often assume the surface preparation is the same. One structural and miscellaneous shop had been using it for a while when they called saying the primer was peeling off the day after it was painted. The key was in their description. The paint was “peeling off in strips, just like if you were peeling off tape.”

We asked Sandy, our coatings expert. Without asking any questions he responded, “The fabricator has a surface preparation problem.” Further discussion revealed for the time that shop had been using water based primer they were coating beams and angles. All hot rolled steel. Their painter said he would wipe the steel with a rag to remove any loose debris and paint. The job with the peeling problem was handrails made of round tube, which was cold rolled. Sandy went on to explain cold rolled steel often has a thin, pretty much invisible oil coating left on it from the rolling process. The solvents in an alkyd (oil based) primer dissolve this surface contamination and adhere to the substrate. Latex coatings have no effect on the oil film. They sit on top of it, the drying agents evaporate and the paint is cured. Except it isn’t touching the steel, hence it peels off.

Steel Supply Note: Caution. Many solvents are oil based. Wiping the steel surface with an oil based solvent such as Mineral Spirits will only be removing one oil film and replacing it with another. In our experience LACQUER THINNER is the most effective solvent for completely cleaning and preparing steel surfaces for water based primer.

“How many gallons of primer were produced in that batch?” he asked. 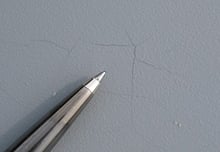 Second Sandy question, “How many fabricators received primer from that batch?”

“How many of the 30 are having this problem?”

“Only this one shop.” We reply. 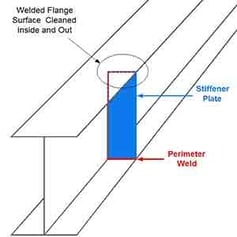 “So if something was wrong with the paint it would be a consistent problem throughout all the pails and drums, and all the customers would be experiencing the same problem, correct?”

You can’t beat the logic.

In this case, the customer was firm in that they did nothing different than they always do and the problem must be the primer. So the next day Sandy and another Steel Supply salesman visited the shop. Sure enough there were about 30 painted I-Beams in the yard and several had the spider cracks. Sandy takes one look and says “Notice the spider cracks are only on the outside surface of the flanges. None on the web or any inner surface.”

Once again, if there were a problem with the primer there would be spider cracks all over the beams, not in consistently specific spaces. Then he pointed out the stiffener plates in the I-Beam webs, and asked that we speak to the welder.

Inside the shop the welder explained how he welded the stiffener plates and immediately cleaned the weld and the steel around it very thoroughly with an electric wire brush. What he was not cleaning was the area on the outside of the flanges opposite the stiffener plate welds. While being welded the steel was heating up enough to oxidize a very thin layer or the outer steel surface. As the primer dried this layer would let go and the cracks appeared.

Again, surface preparation was the key. Wire brushing the outside of the flanges immediately corrected the problem.