Getting the Most Out of Slotted Steel Shim Packs

For structurally sensitive fittings like moment connections, shim plates would not be acceptable.  The slotted shim, either with the single or multiple slot, is the correct alternative.  They install quickly and, most importantly, provide the required full-surface contact.  However, the downside of single or multiple slots are that the gaps being shimmed are not obvious until the steel members are installed.  Only then can the erector be sure of how much gap needs to be filled.  To be sure the erector has the proper thicknesses available, he or she will order these shims in shim packs.

The metal shims in a shim pack will always have uniform length, width and slot measurements.  As far as thickness, the shim can contain any combination that will allow the installer to compensate within 1/32” of the required height.

Note: The phrase “shim pack” is often used as a general term by engineers and detailers to simply describe any packaged set of shims.  For their own convenience, the installer usually orders the steel shims in bulk.

As shown in the single slotted shim drawing below, there are two shims at 1/16” each, and a total height of 1”. This allows the Steel Erector to compensate anywhere from 0 to 1” in 1/16” increments. The result is a shimmed connection accurate to within 1/32” of thickness. 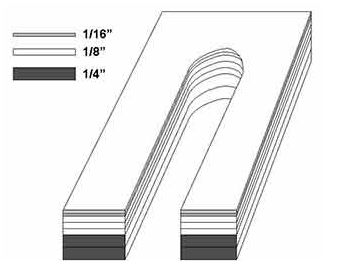 A standard metal shim, also known as a horseshoe shim, or steel horseshoe shim is typically 3” wide.  This accommodates the 3” centers that will interact with the structural shim.

The image above shows the same shim pack with a multiple slotted structural steel shim.  Shim plates with multiple slots are usually made to order, due to the varying dimensions. 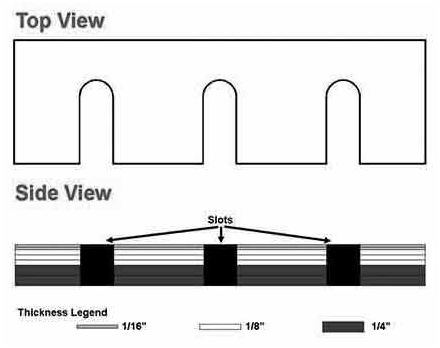 For more information about steel shims, or to order custom or pre-packaged shims, click below!