EZ Sleeves - The Trick Is In The Plastic

For anyone looking to looking to create a post hole before laying down concrete, the process can be a nightmare.  Some steel fabricators will use PVC pipe or a hard rubber tube to create the hole, but that rarely ever solves the problem.  Often, it can be difficult to keep the pipe or tubing in position while pouring the concrete, and after it can be a headache to remove the tubing once the concrete has set.  However, steel fabricators no longer have to worry about setting down post holes—the EZ Sleeve is here!

The magic of the EZ Sleeve—and the reason it is so effective—is its construction.  The EZ Sleeve is made of LDPE plastic (Low Density Polyethylene), and because of that it is strong enough to resist the pressure it’s put under during the concrete pour.  However, the true genius of the EZ Sleeve’s construtction lies in its flexibility.  The actual removal time of the EZ Sleeve is five seconds.

For the steel fabricators, leaving in PVC piping or a hard rubber tool is often a bad idea.  Functionally, there should be nothing between the concrete and the grout in a post hole, so leaving the piping in place is often not a good idea.  This is because all anchoring grouts are designed to bond with concrete, not plastic or metal.  For a durable railing post anchor, there should be nothing interfering with that bond.

The EZ Sleeve creates a post hole, but there is never a risk of plastic being left behind.  Due to its cylindrical cone design, the EZ Sleeve will hold its shape during the concrete pour.  Pressure from the fluid mass as it is being poured will distribute evenly around the cylinder. This and the strength of the LDPE plastic keep the EZ Sleeve from collapsing. Once the concrete cures, the EZ Sleeve can be easily removed.  Using a pair of pliers, simply grab the tab at the top of the cone and pull.

In the illustration of the EZ Sleeve at the top of the page, there is a clear spiral line in the plastic.  This is actually an indentation in the product itself.  As the pliers pull the top tab, the plastic tears along that indentation, unraveling the cone into a love strip of plastic.   This indentation is weak enough to unravel with pliers, but still strong enough to hold up to the pressure of the wet concrete.  Therein lies the beauty in the EZ Sleeves simple yet powerful construction.

In the image to the below, the EZ Sleeve unravels as indicated with pliers. What is left is a clean cone shaped hole where the grout will make full contact all the way around the circumference with the concrete. 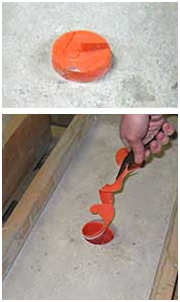 For more information and installation instructions about the EZ Sleeve, click below!