Things are changing a bit for both structural and miscellaneous steel fabricators. In the past, they have mostly stayed away from anything to do with concrete and the masonry side of the business, including rebar. Their interaction was often limited to welding masonry anchors onto columns and beams. This applied to items such as the wire tie, the Hohmann & Barnard Gripstay or the slotted channel. 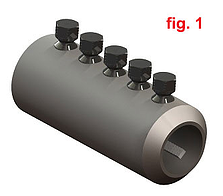 That changes somewhat, as rebar anchors, also known as rebar couplers, are being designed into projects more often. In short, a rebar anchor connects the rebar to a column, beam, relieving angle or any steel member with a strong, positive connection. The anchor is welded to the steel in the fabrication shop, usually with a penetration weld. Later, once the erection is complete the rebar is locked into the anchor. Typically, this step is still done by the mason.

If the anchor / coupler is intended to be welded to steel it should come with a beveled edge to allow for a penetration weld. (See fig. 1) 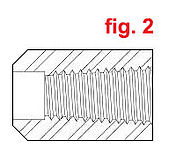 with straight threads. The fabricator should note several things about the thread systems during the process.

The tapered thread is not a pipe thread, which has a gentle taper designed to tighten slowly and form a leak proof fitting. Rebar tapered thread systems are designed for steel and concrete construction and have a more pronounced taper. This is done this way for installation speed. Often, when the rebar is threaded into the anchor, it is long and heavy. Tapering the thread enables the installer to insert it as far as possible before turning. Then, with a few twists, the tapered thread tightens with all threads making full contact.

In the case of the D106 straight thread anchor, the rebar should have an upset thread. “Upset” means the thread is actually larger in diameter than the rebar itself. This is achieved by heating and expanding the rebar end and then threading. Fig. 4.

Also, VERY IMPORTANT. Tapered Rebar Anchors do not have a standard such as UNC. Each manufacturer threads with the intention their product will be used for both the anchor and the rebar. We know of four main manufacturers of the

anchors / couplers. Dayton Superior, Lenton, Bar Splice and Ancon. Located in the U.K., Ancon does not appear on U.S. projects often. The shop drawings we see most often specify Dayton Superior or Lenton. The fabricator should use the type specified to assure the tapered thread insert purchased by the rebar contractor will thread properly into the coupler and lock with sufficient strength.

While this should not affect the D106 straight thread system, it is nonetheless recommended the steel fabricator adhere to the system called out in the plans.